Charles Dickens In A Train Crash By Sebastian Murphy-bates

Posted on December 4, 2019 by Katherine Wacker

Seven carriages plunged off a bridge in the Staplehurst rail crash of 1865 after a train derailed crossing the Kent viaduct.

Not only did the great novelist survive, but he tended to victims, some of whom died in front of him. 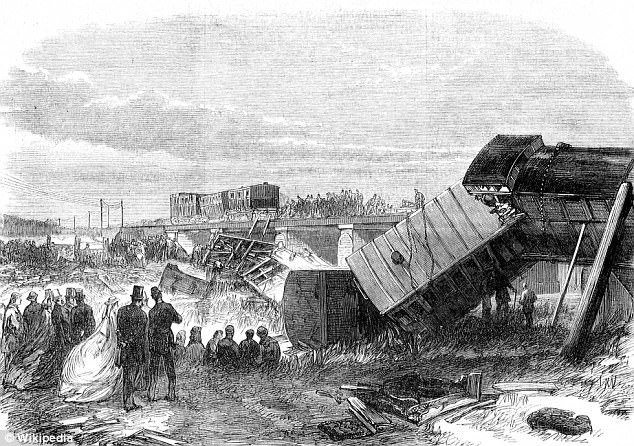 A sketch of the Staplehurst rail crash in Kent shows how seven carriages plunged from the viaduct. Dickens wrote about the accident in a letter to his friend

The Oliver Twist writer described the traumatic effects the crash had on him two months later.

It left him fearful of travelling on trains, which he was regularly forced to do from his north Kent home to his work in London.

In the letter to friend and French opera singer Pauline Viardot, he wrote: ‘I thank you for your kind and affectionate letter received after my escape from that terrible accident.

‘The scene was so affecting when I helped in getting out the wounded and dead, that for a little while afterwards I felt shaken by the remembrance of it. 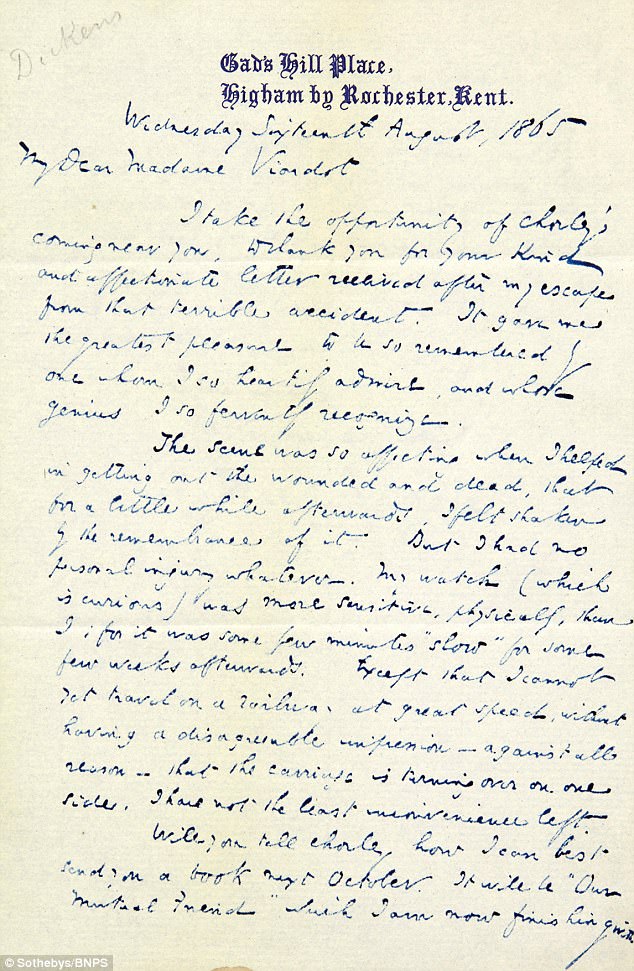 The letter tells how Dickens witnessed people die after the crash, which killed 10 and wounded 40 after a train derailed over a Kent viaduct

‘But I had no personal injury whatsoever. My watch (which is curious) was more sensitive, physically, than I; for it was some few minutes “slow” for some few weeks afterwards.

‘Except that I cannot yet travel on a railway, at great speed, without having a disagreeable impression – against all reason – that the carriage is turning on one side, I have not the least inconvenience left.’

The letter now belongs to a European-based collector but is coming up for sale at Sotheby’s in London.

Gabriel Heaton, of Sotheby’s, said the letter was fascinating as, despite the trauma Dickens suffered, it still brought out the story-teller in him.

‘This accident was quite an important biographical aspect of Dickens’ later life,’ he said.

‘He was a very well known figure at the time and so it was common knowledge that he survived it.

‘He was a prolific letter writer but it is rare to come across a letter that contains quite a powerful account like this written quite soon after the accident.

‘Several people were killed in the crash and someone died in front of him. It was a highly traumatic event and not surprising it had quite a long-term effect on him. 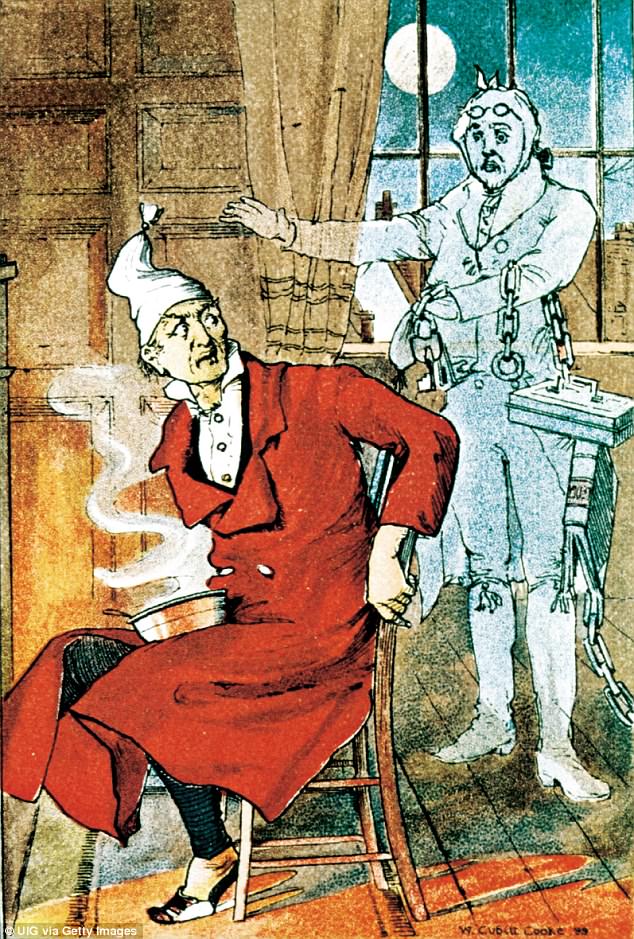 Scrooge sees Marley’s ghost in A Christmas Carol, written by novelist Charles Dickens, who was lucky to survive the Staplehurst crash

‘But what is particularly striking about this letter is the detail about his watch.

‘He is trying to make sense of this traumatic event and, being a great story teller of his time, he turns it to a narrative.

‘The detail about his watch running slow ever since is just the sort of thing he would draw on. It is the mark of a great storyteller.

‘He wrote this letter to someone he knew well and trusted.’

Dickens met Pauline Viardot while staying in Paris in 1855 and heard her sing on many occasions.

It was through her that Dickens met other Parisian cultural figures such as George Sand.

The letter is being sold with a pre-sale estimate of £5,000 tomorrow.

Katherine Wacker is currently a reviewer for Bethany House Publishers, and Howard Books. She is a Craftsman graduate of the Jerry B. Jenkins Christian Writer’s Guild. She holds a B.A in History from San Diego State-Imperial Valley Campus. In her spare time she likes to read books, watch sports, and do jigsaw puzzles. She lives at home with her parents, her dog, Roscoe, and kitty, Lily.
View all posts by Katherine Wacker →
This entry was posted in History and tagged Authors, Charles Dickens, Charles Dickens In A Train Crash, letters, Sebastian Murphy-bates, writing. Bookmark the permalink.