Posted on December 4, 2019 by Katherine Wacker 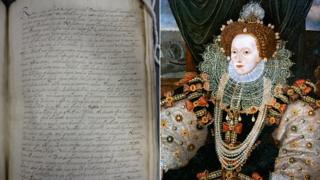 A manuscript written by Queen Elizabeth I has been discovered after lying unnoticed for more than a century.

A literary historian from the University of East Anglia made the startling find in Lambeth Palace Library in London.

He turned detective to piece together a series of clues to establish that the queen was the author of the writings.

The work is a translation of a book in which the Roman historian Tacitus wrote of the benefits of monarchical rule.

It was while searching in the library for translations of Tacitus that Dr John-Mark Philo found the mysterious 42-page manuscript.

He established it was written on a very specific kind of paper, which had “gained special prominence” in the Tudor Court in the 1590s.

“There was, however, only one translator at the Tudor court to whom a translation of Tacitus was ascribed by a contemporary, and who was using the same paper in her translations and private correspondence – the queen herself,” added Dr Philo.

A further clue was the presence of three watermarks – a rampant lion and the initials G.B with a crossbow countermark – which are also found on the paper Elizabeth I used in her personal correspondence.

But the clinching argument was the handwriting. The translation was copied by one of her secretaries but it is covered in corrections and additions which match the queen’s highly distinctive, indeed rather messy, handweiting.

“The corrections made to the translation are a match for Elizabeth’s late hand, which was, to put it mildly, idiosyncratic,” said Dr Philo.

“The higher you are in the social hierarchy of Tudor England, the messier you can let your handwriting become. For the queen, comprehension is somebody else’s problem.”

Dr Philo suggested the monarch might have been studying the text for guidance on how to rule.

The translation is from Tacitus’s history of the Roman Empire and traces the death of Augustus, the rise of the Emperor Tiberius and the centralisation of power in a single individual.

Dr Philo said Tacitus “has always been considered the subversive historian, and was later reviled under Charles I as anti-monarchical”, which raises questions about why it would be of interest to Elizabeth. Was she drawing upon it for guidance on how to rule or for examples of misrule to be avoided?

Alternatively, the translation could just have been a hobby for a queen who is known to have enjoyed classical history.

The manuscript has been at Lambeth since the 17th Century but it is the first time the author has been identified.

Elizabeth I’s Translation of Tacitus is published on 29 November 2019 in the Review of English Studies.

Katherine Wacker is currently a reviewer for Bethany House Publishers, and Howard Books. She is a Craftsman graduate of the Jerry B. Jenkins Christian Writer’s Guild. She holds a B.A in History from San Diego State-Imperial Valley Campus. In her spare time she likes to read books, watch sports, and do jigsaw puzzles. She lives at home with her parents, and kitty, Lily.
View all posts by Katherine Wacker →
This entry was posted in Current Events, History and tagged BBC, By Rebecca Jones, Elizabeth I revealed as secret scribe of historic manuscript, Historical, Messy handwriting. Bookmark the permalink.